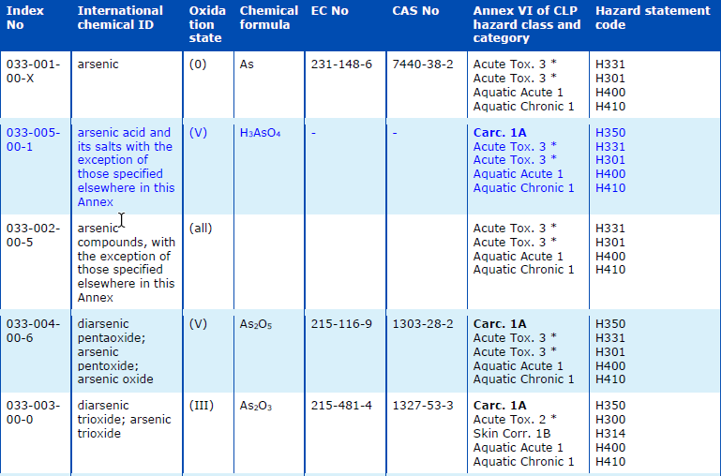 Following the REACH registration of As metal, industry came to a more severe self-classification for arsenic metal. See attached pdf for more details.

An occupational exposure limit is an upper limit on the acceptable concentration of a hazardous substance in workplace air for a particular material or class of materials. It is typically set by competent national authorities and enforced by legislation to protect occupational safety and health. It is an important tool in risk assessment and in the management of activities involving handling of dangerous substances.

1  C: the substance is considered carcinogenic

2 DECOS originally referred to TRK values, which are no longer used in DE (since 2005)

Biological limit values have been issued by ACGIH (BEI) and MAK Commission for the sum of inorganic arsenic (As3+ and As5+) and methylated metabolites (MMA and DMA). These are 35 and 50 µg/l, respectively. In Finland, a BLV of 70 nmol/l has been set for the inorganic arsenic (sum of As3+ and As5+) in urine. This corresponds the 8 h TWA exposure to arsenic at the level of Finnish OEL of 0.01 mg/m3.